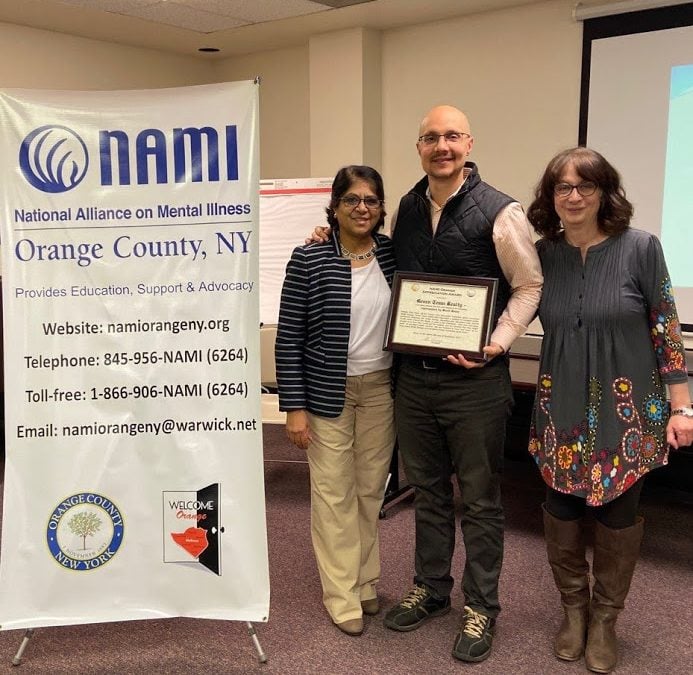 Geoff Green proudly accepted NAMI Orange‘s Appreciation Award on behalf of Green Team Realty at their 15th Annual Meeting. The meeting was held on November 25 at the Orange County Department of Mental Health in Goshen, NY.. Dhanu Sannesy, President of NAMI Orange is pictured here with Geoff Green and Susan Wynn. She spoke passionately about the work being done. And inspired us all with the work yet to do.

Green Team raised both awareness and funds for NAMI Orange through its Team Up for Hope initiative. I am a member of NAMI Orange. But I am also the Green Team’s Content Marketing Manager and part of Team Up for Hope. Therefore, I was asked to present the Appreciation Award to Geoff Green. And it was an honor to read the following inscription to him and all those attending. 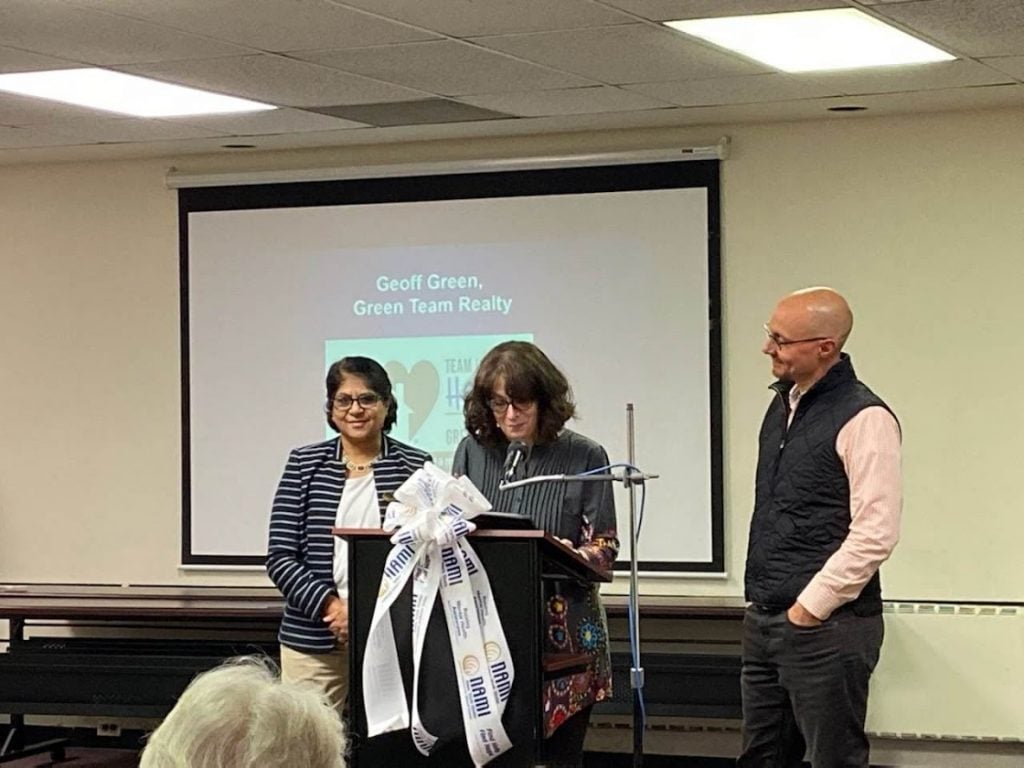 Besides their Team Up for Hope’s very successful fundraiser which benefited NAMI Orange, Green Team Realty also organized a webinar to increase public awareness featuring two NAMI Orange members who discussed how mental health issues impact the family as well as the individual – and who educated people as to how they could get the support and the services that they might need. An excellent public service! We are honored to have had Team Up for Hope select NAMI Orange as a recipient of their charitable good works.

The National Alliance on Mental Illness, “NAMI,” began at a kitchen table in 1979. A small group of families whose lives had been impacted by mental illness got together. And they decided to take some action. Now, 40 years later, it is the largest grassroots mental health organization in the United States. There are 48 NAMI State Organizations and more than 600 local affiliates.

These statistics are posted on the NAMI website  And they’re frightening.

Imagine someone you know and care about becomes one of these statistics. Family members and friends suddenly find themselves in a world turned upside down. They don’t understand what has happened to their loved one. Furthermore, they don’t what to do or say to help that person. And the stigma surrounding mental illness can make it difficult to discuss the challenges with friends and family. As a result this further isolates both patient and family.

My family has lived this reality. My youngest daughter, Andrea, was diagnosed with bipolar and anxiety disorders at the age of 14. There was nothing that prepared us for the journey we suddenly found ourselves on. No guidebook to explain the mania, then the plunges into deep despair. There were prescriptions for lots of medications in lots of combinations. In addition there was therapy. However, there was nothing that helped us all to understand what was happening within her brain. No advice on how to communicate or set limits. No one telling me it wasn’t my fault. Chaos ruled our lives, exacerbated by loneliness.

I was introduced to NAMI Orange by a friend whose child was also struggling with a mental health diagnosis. We both signed up to take NAMI’s Family-to-Family class. This is a “peer education program for family members of adults living with mental illness.”  Andrea was in the recovery stage of her illness at that time.  I didn’t really need the course, I thought. But maybe I could pick up a few helpful tips. Instead, what I experienced was life changing.

People with a common goal made up our class. We wanted to learn how to better understand and help our loved ones. NAMI gave us the tools to better understand the science behind mental illness. Further, we learned about symptoms and changes to behavior and personality. In addition, we were taught communication skills, crisis preparation plans and so much more. Finally, we became our own support group. We shared our stories and the challenges we were facing. Most importantly we understood what everyone was going through.

NAMI Orange is an all-volunteer organization. Family-to-Family teachers are peers who also have an adult family member living with a mental illness. Furthermore, they go through specialized training. So do facilitators of support groups and presenters of in-school programs. The dedication of these volunteers cannot be overstated.

Team Up For Hope – Teaming up with NAMI Orange

The Green Team believes in giving back to the community. Money was raised through Light up the Holidays for the Warwick Valley Humane Society and Warwick Playground Dreams. After a few years of doing holiday lights contests, it was decided to change to a basic fund-raising effort. The name suggested was Team Up for Hope. And we decided we would team up with NAMI Orange and NAMI Sussex.

As a result, we arranged a meeting with representatives of these organizations. The information they shared with us and their passion for NAMI made a lasting impression on us. Together we were determined to raise not only funds, but awareness. That included the webinar mentioned in the award, which you can view here.

In addition, Andrea told her story of living with mental illness and her journey to recovery in a second webinar.  Andrea concluded her story by performing an original song she had written about living with Bi-Polar Disorder. Sheila Sutton represented NAMI Orange again. She spoke to Andrea’s story. And Sheila also relayed the help that NAMI offers. Moreover,  Geoff  announced that Team Up for Hope had raised over $3,100 for NAMI Orange and over $1,500 for NAMI Sussex.  To view that webinar, click here.

Andrea is a believer in sharing her journey with others in hopes of helping end the stigma surrounding mental illness. And I share her story with her permission. Further, we both share our thanks to Geoff Green. He first met Andrea during the webinar. However, knowing her diagnosis, he never hesitated to interview her for a position at the Green Team. She is now Agent Service Manager at the Warwick Office. Above all, Green Team shows that we are always Teaming Up for Hope!